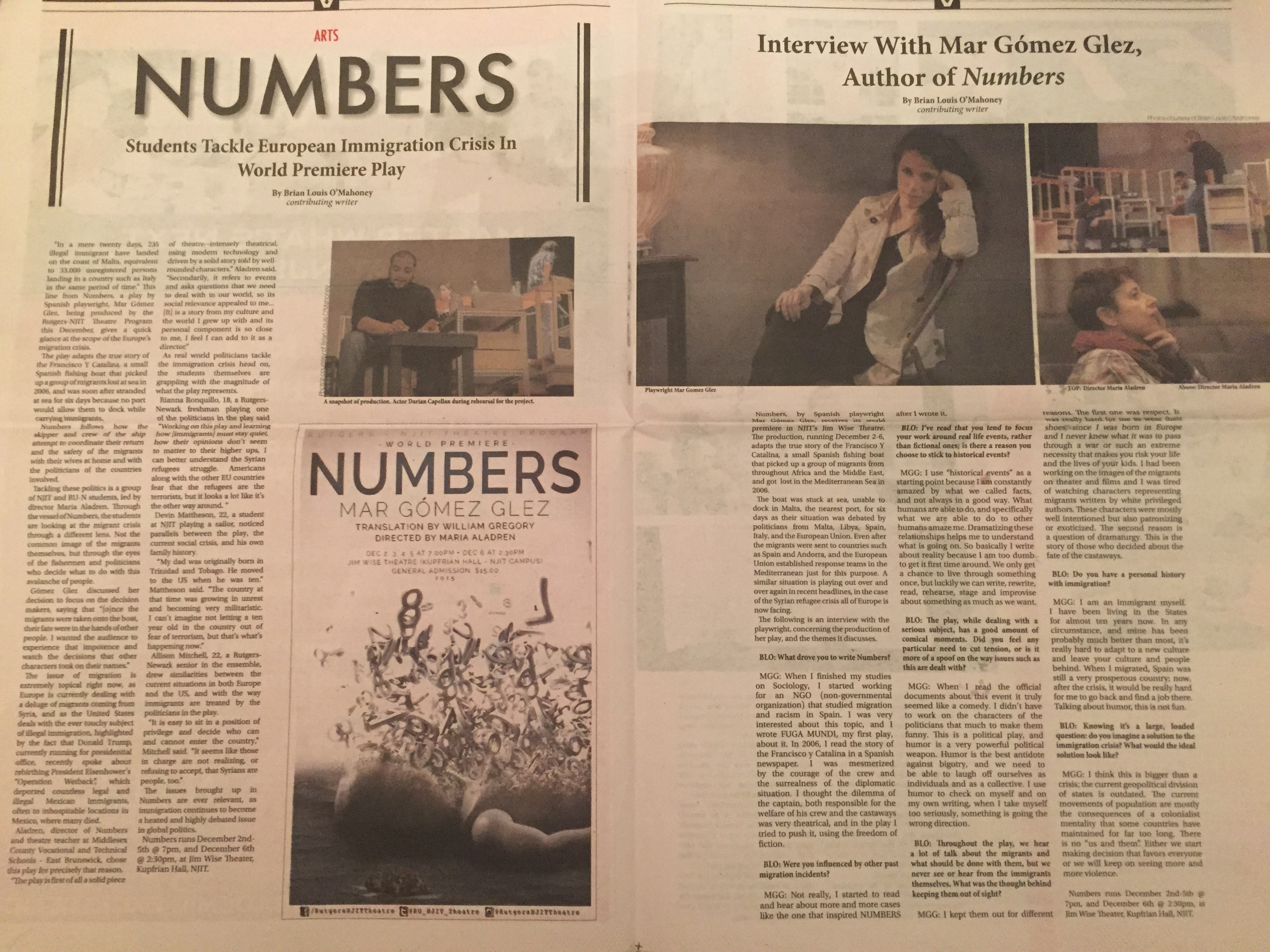 “In a mere twenty days, 235 illegal immigrant have landed on the coast of Malta, equivalent to 33,000 unregistered persons landing in a country such as Italy in the same period of time.” This line from Numbers, a play by Spanish playwright, Mar Gómez Glez, being produced by the Rutgers-NJIT Theatre Program this December, gives a quick glance at the scope of the Europe’s migration crisis.

The play adapts the true story of the Francisco Y Catalina, a small Spanish fishing boat that picked up a group of migrants lost at sea in 2006, and was soon after stranded at sea for six days because no port would allow them to dock while carrying immigrants.

Numbers follows how the skipper and crew of the ship attempt to coordinate their return and the safety of the migrants with their wives at home and with the politicians of the countries involved.

Tackling these politics is a group of NJIT and RU-N students, led by director Maria Aladren. Through the vessel of Numbers, the students are looking at the migrant crisis through a different lens. Not the common image of the migrants themselves, but through the eyes of the fishermen and politicians who decide what to do with this avalanche of people.

Gómez Glez discussed her decision to focus on the decision makers, saying that “[o]nce the migrants were taken onto the boat, their fate were in the hands of other people. I wanted the audience to experience that impotence and watch the decisions that other characters took on their names.”

The issue of migration is extremely topical right now, as Europe is currently dealing with a deluge of migrants coming from Syria, and as the United States deals with the ever touchy subject of illegal immigration, highlighted by the fact that Donald Trump, currently running for presidential office, recently spoke about rebirthing President Eisenhower’s “Operation Wetback”, which deported countless legal and illegal Mexican immigrants, often to inhospitable locations in Mexico, where many died.

Aladren, director of Numbers and theatre teacher at Middlesex County Vocational and Technical Schools – East Brunswick, chose this play for precisely that reason.

“The play is first of all a solid piece of theatre–intensely theatrical, using modern technology and driven by a solid story told by well-rounded characters.” Aladren said. “Secondarily, it refers to events and asks questions that we need to deal with in our world, so its social relevance appealed to me… [It] is a story from my culture and the world I grew up with and its personal component is so close to me, I feel I can add to it as a director.”

As real world politicians tackle the immigration crisis head on, the students themselves are grappling with the magnitude of what the play represents.

Rianna Ronquillo, 18, a Rutgers-Newark freshman playing one of the politicians in the play said “Working on this play and learning how [immigrants] must stay quiet, how their opinions don’t seem to matter to their higher ups, I can better understand the Syrian refugees struggle. Americans along with the other EU countries fear that the refugees are the terrorists, but it looks a lot like it’s the other way around. “

Devin Mattheson, 22, a student at NJIT playing a sailor, noticed parallels between the play, the current social crisis, and his own family history.

“My dad was originally born in Trinidad and Tobago. He moved to the US when he was ten.” Mattheson said. “The country at that time was growing in unrest and becoming very militaristic. I can’t imagine not letting a ten year old in the country out of fear of terrorism, but that’s what’s happening now.”

Allison Mitchell, 22, a Rutgers-Newark senior in the ensemble, drew similarities between the current situations in both Europe and the US, and with the way immigrants are treated by the politicians in the play.

“It is easy to sit in a position of privilege and decide who can and cannot enter the country,” Mitchell said. “It seems like those in charge are not realizing, or refusing to accept, that Syrians are people, too.”

The issues brought up in Numbers are ever relevant, as immigration continues to become a heated and highly debated issue in global politics.