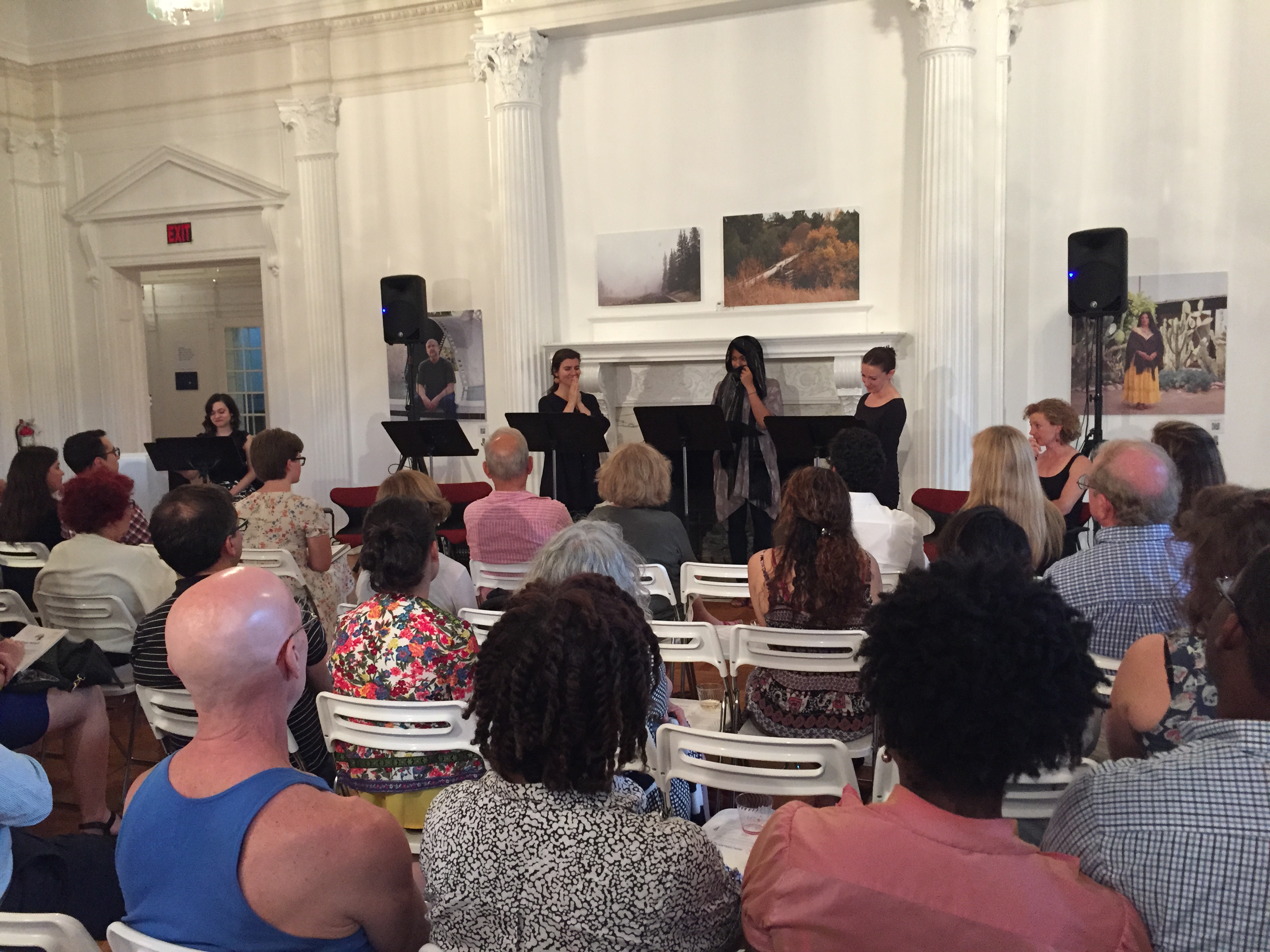 Words + Photos by Antonio Hernandez.Mar Gómez Glez is a Spanish playwright and novelist, currently based out of Los Angeles. A self-described nomad, who has lived in Madrid, New York City and Baltimore, she has been lauded internationally for her work in theatre. She has received the Calderón de la Barca Theater Award and the 2008 Arte Joven Latina Award, amongst other prizes – she has also penned the novels La Edad Ganada (2015) and Cambio de sentido (2010), the children’s book Acebedario (2006), in addition to many other plays and short stories.

As part of Spain Arts & Culture‘s summer programming and Center Stage, the State Theatre of Maryland, Mar presented a reading of her newest play, Fuga Mundi. The play centers around the lives of four women in 17th-century Spain, who all have ties to a convenant. Juana, a sculptor, creates a statue of the Virgin based on a Moorish girl, igniting a controversy ahead of impending inquisition. The politics of race and gender, as well as the ramifications of discrimination and systemic oppression all intersect when the women of the covenant pressure Juana to alter her work.

Mar Gomez discusses the influences of Fuga Mundi, contemporary links to her work set in 17th-century Spain, as well as the politics of identity, race and immigration.

Q: Synopsis of the stage reading of play we just saw.

MAR GOMEZ: We just saw a reading of a play called Fuga Mundi. It happens in Spain in the 16th Century, right after they had expelled the remaining Moor population. It’s about the story of Juana, this sculpturist who has carved a sculpture with the face of a Moorish girl, and that was considered a Heresy at the time. We see her, closed in convent, to sculpt a new sculpture.

Q: Though this is a fictitious story, what kind of places or people influenced the play?

MAR GOMEZ: I was working with an NGO in Spain during the early 2000 and late 1990’s. At that time Spain began receiving a lot of immigrants, becoming a more diverse country. I wanted to do something current, but I wanted to look at that moment in history when Spain became a very homogenous country. This seemed like the moment that this process was completed. They expelled the Jewish population in 1492, and then had expelled the Moorish population. 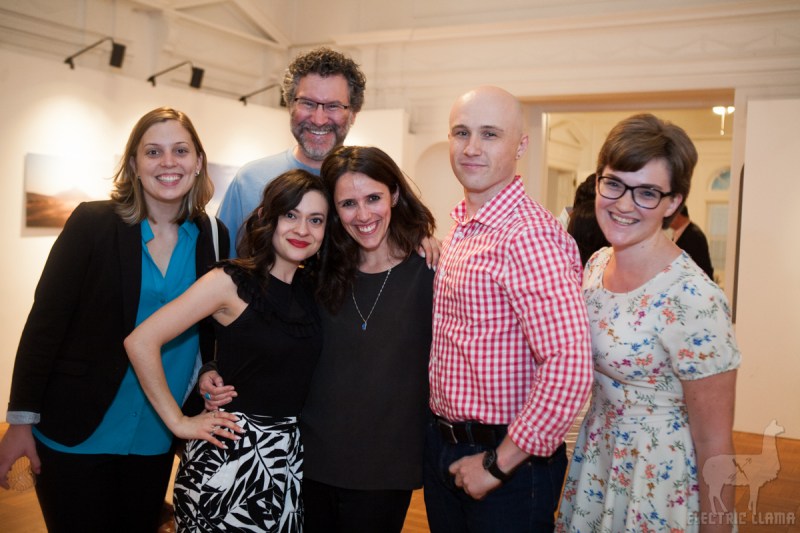 ^ The cast of the Fuga Mondi stage reading, presented at the Former Residence of the Ambassador of Spain.

“Both in Europe and here, there’s an incredible problem with immigration and how we perceive the different communities that form society”

Q: Can you talk about the theatre in the play, that was based on a actual convent?

MAR GOMEZ: It was based on various convents; I read a lot about convents at that time. There were several things I discovered: I didn’t know that someone that was a layperson could open her house to make a convent, and this actually happened. Back in the day, women didn’t have that many options.

Q: How did you conduct your research?

MAR GOMEZ: Nowadays researching isn’t that hard, especially now that the internet is a great source, the difficult part is to select the data. I remember that I found a dissertation of someone – it wasn’t published in a book – but I could access it at La Biblioteca Nacional in Madrid. It was about convents in the 17th century, in Madrid. It was basically about the lives of these women in a very practical way. For example, the way they divided the time of the day in the hours of pray. That is how I also decided to divide the play. I work a lot with those details.

“What we wanted to do with this sculpture, is [explore] how different people could perceive the different ways”

Q: What are some contemporary linkages that you see, based on a story that was set over 400 years ago?

In the 17th century, Spain was in a great financial crisis, and so the Moorish population was kind of the scapegoat for this; everybody was blaming them. So it happens now, for example, in France, the Le Pen Party – the extremist right party – is winning lots of votes because they are blaming the immigrants for the economic crisis.

MAR GOMEZ: Reality is built out of our fictions. We sometimes choose, well maybe not us, I mean we as a society, to create specific fictions an excuse for a situation because they are powerful interests to maintain the status quo. When there is a problem we can find a scapegoat and we choose not to see what’s really causing the problem, because that would mean to make changes that we might or might not be willing to undertake. We do that as individuals as well.

“Her devotion was a much purer devotion than any other woman in the play, but she was the one considered a heretic person”

Q: Did you intend to start the conversation about identity, immigration and social constructs like race?

MAR GOMEZ: That was always part of the question, with the Moorish girl being the face of the statue. In a sense, her devotion was a much purer devotion than any other woman in the play, but she was the one considered a heretic person. It was very much part of the origin of this play.

“This question of race keeps on happening, because I think it’s a very easy way to have scapegoats in society, when things don’t go the way we want them to be”

Q: For an American audience, do you think any changes have to be made? In formal education in the U.S., we don’t get much Spanish history. A lot of people may not understand the dynamics and importance of the Moorish expulsion, and the tepid history of the Moors.

MAR GOMEZ: What’s happening with the Latino population is kind of the same. I think it’s not so much about the historical facts, but the fact this question of race keeps on happening, because I think it’s a very easy way to have scapegoats in society, when things don’t go the way we want them to go.

It’s basically playing people against each other, so you don’t focus on the real problems, [like] how we don’t distribute the resources or the power. We have the one percent and the ninety-nine percent. That’s a problem, not what is our cultural heritage or how we look.

“That’s the beauty of theatre; it can bring together different people in the same space and have a conversation”

Q: Have you ever thought about any of the solutions to some of those problems?

MAR GOMEZ: I think the primary way is education and communication. That’s the beauty of theatre; it can bring together different people in the same space and have a conversation. You have to hear everyone. I think some forms of art, like theatre or any performing arts, are a big way of having people interacting in a conversation, because we’re actual bodies in the same place, instead of being locked at home in front of screens.

Q: Did you get any feedback from people affected by the performance? Did anyone change their minds on certain issues?

MAR GOMEZ: I wrote consecutively this [play] and another one that is called Numbers, that is also about immigration but from a materialistic perspective. When it was presented in Spain, there were people that came to me, telling me they had never thought about the question of immigration in that way.

It’s about a boat that keeps 50 immigrants that were drowning in the Mediterranean and the crew have to make the choice: help them or not. They try to bring them to Malta, but they are not allowed to get don’t allow to go ashore. So they have to live in the same boat for a week, in a boat that was prepared for ten people, not 60. This was inspired by a real story and it was very interesting to hear the comments of people.

MAR GOMEZ: In five days, I’m going to be in New York City, where I lived for seven years. I’m very happy to be there because I’m going to see my friends. In five months, I will probably be in L.A., where I’m currently living more-or-less, I’m a very nomadic person. In five years, I have no idea.

Thanks Mar for the great interview! Visit her official website for more information on upcoming productions and works!